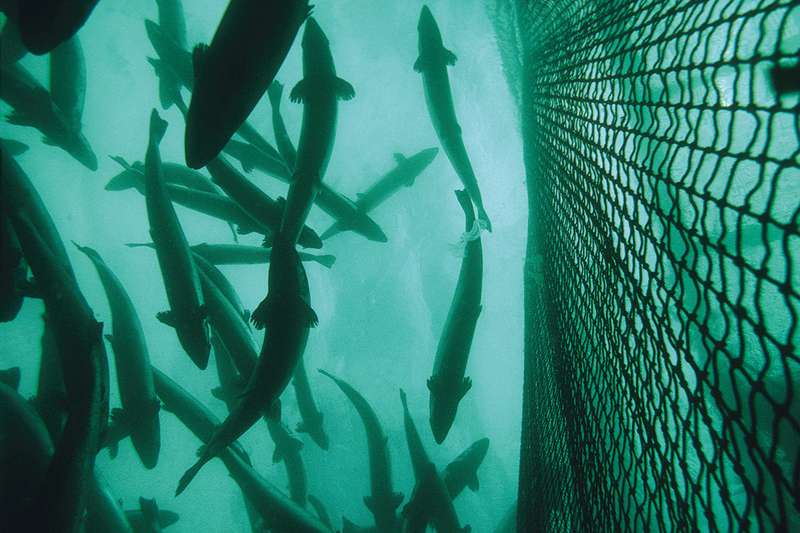 A lethal combination of climatic and oceanographic factors is causing a massive mortality in Norwegian salmon farms this spring. Losses are so far estimated in thousands of tonnes,  translating into hundreds of millions of euros, as many cages are stocked at the end of the ongrowing cycle by animals approaching commercial size (3 to 5 kg in weight).

The first episodes were detected on May 12 in the nordic provinces of Nordland and Troms, which had already been affected by mass mortalities of similar etiology during the months of May and June 1991. High concentrations of the haptofite microalga Chrysochromulina leadbeaterii have been detected in the affected areas. This is a common species in Norwegian waters, small in size – usually less than ten microns – but which under specific environmental conditions can cause toxic blooms resulting in acute mortalities. Certain hemolytic compounds secreted by this microalga affect the gills of salmon, whose respiratory capacity is severely compromised, resulting in sudden death by asphyxia, practically without warning.

Factors such as the lack of wind and low turbidity characteristic of calm seas, in combination with intense and prolonged luminosity and salinities typical of this time of the year favor microalgal proliferation. Although the situation is being monitored by the Norwegian authorities, most forecasts based on hydrological models predict an aggravation of the situation, as the toxic bloom expands and compromises the continuity of production in farms located in more northern areas. Logistic problems related to the withdrawal of mortalities and lack of capacity to handle the biomass during the inertization process through conversion into fishmeal have been reported at several sites.

While it is true that a growing number of voices question the sustainability of the industry, farmed salmon is currently a very popular product for the consumer, produced efficiently in terms of resource use while maintaining enviable standards of animal welfare and environmental respect. For instance, the production of 1 million kg of beef requires 3,600 hectares of pasture, while only 1.6 Ha are used to produce the same amount of salmon. In recent years the percentage of fishmeal in salmon feed has been reduced from 80% to 30%, reaching conversion levels much higher than other animal production industries such as pig and poultry farms, while maintaining very reduced carbon footprints (less than 3 kg of CO2 / kg compared to 30 kg of beef and 6 kg of pork).

Although some analysts predict a loss of more than 1% of the Norwegian salmon production due to this mortality, the aquaculture of this species is today a prosperous and expanding industry. The forecasts made prior to the toxic episode estimated a 3% increase in the volume of Norwegian production during 2019 over the 1.2 million tonnes produced the previous year, with average prices of 6,4 €/Kg compared to the 6,2 €/Kg reached in 2018. A 4% increase in production is forecasted worldwide, with a total production value close to 12,000 million euros and a workforce impact of around 150,000 direct jobs. In order to contextualize these figures, in Spain, the country with the largest fishing fleet in the European Union, the total volume of fish landed in 2017 from fisheries remained just below one million tonnes, with a total value of 2,000 million euros and a workforce impact of approximately 40,000 direct jobs.