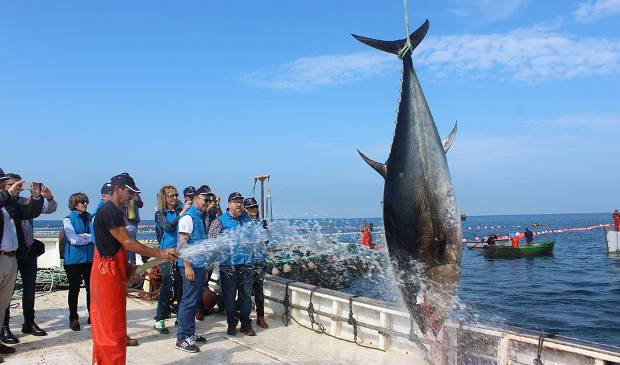 For several decades now, an on-growing activity has facilitated the continuity in the supply of a highly appreciated species, the bluefin tuna (Thunnus thynnus), once abundant in Atlantic and Mediterranean waters, and today in delicate situation and now extinct in the Black and Caspian Seas.  The semi-cultivation process consists in the capture of wild juveniles of this species to introduce them in cages where they are fattened to commercial size, harvested and exported to highly lucrative markets located mainly in the Far East. A million-euro business focused on a very sensitive species, which has suffered a reduction of up to 60-80% of its stocks, and is currently subject to a strict program of catches regulation under the control of the International Commission for the Conservation of Atlantic Tunas (ICCAT).

In theory, these specimens are under the control of a certification program guaranteeing their total traceability from capture to the final consumer, as part of a protection plan including stock assessments, rigorous fishing quotas and intense scientific research in order to obtain an accurate characterization of the state of the species. In practice, poor administrative control in the follow-up of these programs has favored the creation of an immense and juicy black market, propelled by the incipient popularity of sushi and sashimi, resulting in the massive and uncontrolled capture of juveniles during the last few decades, and reaching an annual turnover in excess of 400 million euros according to conservative estimates by the International Consortium of Investigative Journalists (ICIJ).

In Spain, the Tarantelo operation carried out by the Civil Guard dismantled last June the illegal activities of a criminal organization engaged in the introduction of illegal bluefin tuna in the national and international markets. This is one of the largest global operations against fishing fraud, affecting fish distribution companies in 12 Spanish provinces and dozens of people and companies in several countries (France, Malta, Morocco, Portugal, Tunisia, Turkey). All this with the stellar collaboration of fishermen catching undeclared tuna on the high seas to unload it in Tarragona and Barcelona ports, ​​and government authorities facilitating the export of about 2,500 tons of illegal bluefin tuna annually mainly from Malta, and marketing it through Spain to national (Mercasevilla, Mercabarna, Marcamadrid) and international destinations. The National Court is pressing charges against 67 agents, taking into account people and companies, charging them with crimes against fauna, public health, document falsification, money laundering and other crimes committed within an unlawful gang.

How many times have we suffered movies like this in the fishing industries? Our taxes subsidize expensive propaganda campaigns bombarding us with hunky-dory messages claiming everything is well regulated and under control, we are dealing with a responsible activity retaining great future prospects, we are taking care of fragile resources, preserving them for future generations… to once again wake up to the pirate fishing terror, the secret cargo hold, the dynamite and the lies, the fish mafias unloading in remote ports, the food fraud, the extinction of species and the bursting Swiss bank accounts.

A minimally proactive management would have required years ago the cultivation of a minimum percentage of domestic tuna fry, favoring the investment of these million-dollar companies in R & D for closing the cycle for the cultivation of this species, where encouraging results have already been obtained. But although the main victim from these horrid episodes is undoubtedly the reputation of many responsible, honorable fishermen, at this point we simply cannot trust in the honest management of a resource subject to such levels of greed, opacity and corruption. After millennia have elapsed and we are comfortably installed in the anthropocene, the sustainability of agriculture and livestock farming has proven clearly and unquestionably evident. While the supposed and much praised sustainability in the exploitation of fishing resources, wild and precious, is sounding more and more like a little fairy tale. Told by dirty fairies, corrupt and rotten to the core.