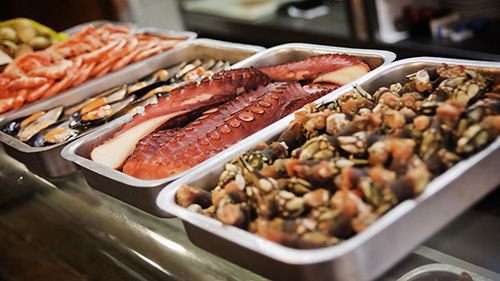 Summer is here and delicious shellfish appear more tempting than ever, offering exquisite flavors and textures and allowing us to savor the taste of the sea. It is worth considering the nutritional virtues and flaws derived from the consumption of this type of seafood, which includes two well differentiated categories: crustaceans and molluscs. Crustaceans such as crabs or shrimps have a segmented body and a rigid, pigmented exoskeleton protecting them from predators. Mollusks can be classified in bivalves, with two calcareous shells such as mussels or oysters, and cephalopods like octopus or cuttlefish, with soft bodies and tentacles giving them a very characteristic appearance.

In general, they are all rich in proteins and low in fat, contributing to our diet with many important vitamins such as vitamin A, important for sight and skin, the immune system and the production of red blood cells; vitamins B3 or B12, essential for the nutrition of our nervous system and the wellbeing of cellular metabolism. Like most foods of marine origin, they are also a very important source of macro and microminerals, such as iron, phosphorus, selenium or zinc, of great relevance for key functions such as the oxygen carrying capacity of hemoglobin, the nutrition of bones and teeth, cellular protection against free radicals, wound healing or DNA synthesis.

Compared with fish, they retain several advantages such as the accumulation of lower levels of certain pollutants such as mercury, although some bivalves contain their own biotoxins. Many crustaceans like the prawns have high levels of sodium, accumulating dangerous heavy metals such as cadmium in their heads, and raising uric acid levels in the blood. The nutritional profile of these animals varies depending on the cooking technique: the cholesterol content in steamed clams, for example, increases two fold when compared to a raw presentation.

It is worth considering the peculiarities of the fat fraction of shellfish. Shellfish are generally low-calorie foods, high in unsaturated fats rich in omega-3 favoring the formation of high-density lipoprotein or “good cholesterol” in blood. However, crustaceans and cephalopods in particular have high levels of cholesterol: squids, with 220 mg per 100 g, are well above the cholesterol content of ox sirloin (145 mg/100 g).

Finally, among the cephalopods, the most moderate levels of cholesterol are found in the octopus (50 mg/100 g), being twice as high in cuttlefish (110 mg/100 g) and even higher in squid and giant squid (200 mg/100 g). We regret to inform you that, due to their hepatic metabolism, the joint consumption of shellfish and alcoholic beverages favors the increase of cholesterol levels in the bloodstream. Cheers!